Have you ever bought a pair of socks and after wearing them the first time found that the seam on the toe made the socks unbearably uncomfortable to wear?

I am always on the lookout for wool socks, that are well made, light and hopefully comfortable on the tootsies but occasionally I get suckered.  Like with the last six pack of socks I bought for my husband.  After the first wear they were pronounced unfit for duty.  That's eight whole dollars wasted.  I ask myself, should I throw them away or give them to a second hand store?  No! No way will I waste these socks instead I will attempt to re-knit the toe in a make work project that will involve hours of my time and energy. 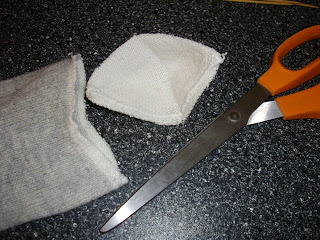 I started in the kitchen cutting the toe off, had a nice light snack to bolster my energy and then moved to the living room. 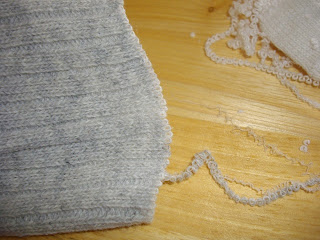 Comfortably ensconced in my couch I could deal with pulling the yarn back to the line of gray yarn indicating the beginning of the toe.  As I pull back the yarn individual stitches are revealed making it easier for the next part. 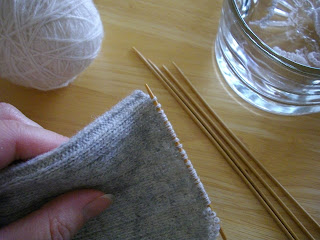 After a good stiff drink I began picking up the stitches all around the sock toe.  I don't remember how many there were but its important to pick up every stitch and to ensure that all strands are neatly over the needles.  I used 0 mm bamboo needles which are perfect for picking up the loops.  This process gave me plenty of time to consider factory knit socks. They can be terrific because they are made with very fine materials and very closely woven making them comfortable and sturdy.  Added value comes from not having to make them yourself.  However factory knit socks are often sewn shut along the toe leaving a bulky and uncomfortable seam leaving me, and my husband in this case, bitter and foot sore. 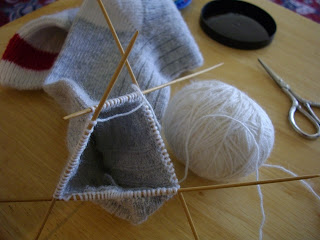 Once all your stiches are picked up the rest is a breeze!  Pick a lightweight, wool sock yarn for finishing the toe and knit it like you would a regular toe.  I like to decrease four stiches every row until I have around 22 stitches left then I will knit two together all around until I have around 5 stiches left which I draw up onto a loop. 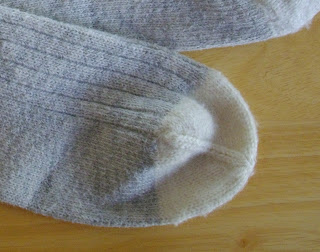 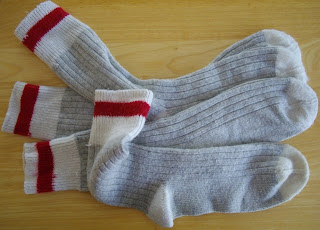 Here are several finished socks.  They have been enthusiastically worn many times since I finished fixing them.  No more sore tootsies.   We just won't talk about how long it took to fix.  I can't say its rational, but making or even re-making things is good for the soul.
Posted by karen wardle at 9:55 AM 1 comment: 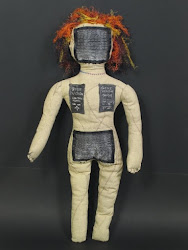